Since we’ve heard from partners and friends about many non-profit organisations affected by the Exchange server vulnerability, we’ve decided to transfer many detection rules from our commercial scanner into the free community version.

If you haven’t heard of THOR or THOR Lite before, I’d recommend reading the product page of at least THOR Lite.

TLDR: It’s a forensic scanner with the focus on traces of hacking activity, configuration backdoors, file anomalies and other things that an Antivirus often misses like web shells or the output of hack tools that has been left over by the attackers. It is portable and doesn’t require an installation.

What we did to improve THOR Lite

We’ve added many of the signature that we also sell with THOR and the VALHALLA rule feed to the Open Source repository. Fellow researchers provided additional YARA signatures for some webshell types and traces in log files.

Only a few rules haven’t been published with THOR Lite in order to keep some detection logic secret. (creative ways to detect the compiled ASP.NET DLLs)

We estimate the coverage provided by the open source rules and IOCs to be around 95%. 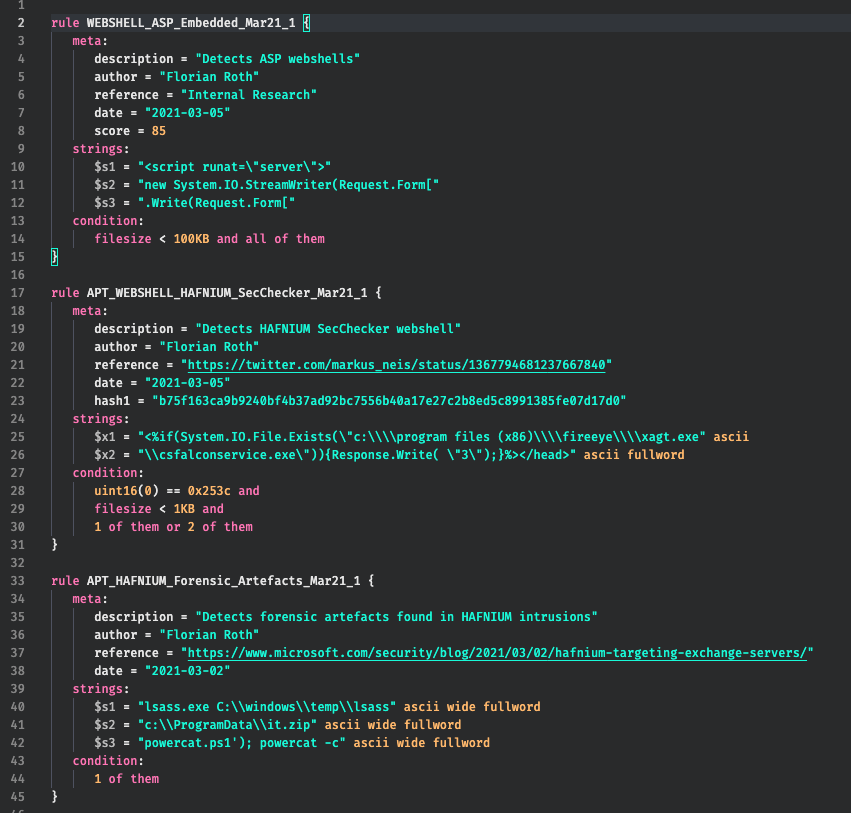 We even have translated the Sigma rules used in THOR into YARA rules in order to enable the detection of these patterns in THOR Lite (as THOR Lite doesn’t allow Sigma scanning but can apply these rules in the available ‘Logscan’ module). 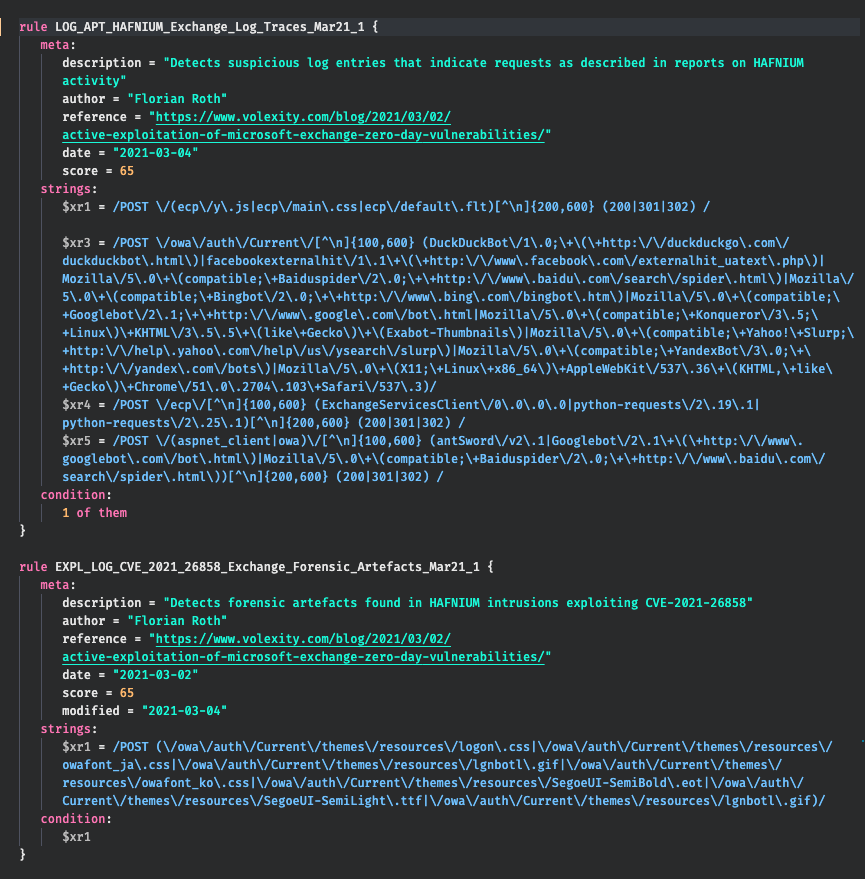 We offer THOR Lite for free. All we require is a newsletter subscription. (side note: we’ve never sent a newsletter to that list so far. This will be the first blog post that will be sent to all subscribers)

After the download you place the license file sent to you in a separate email into the extracted program folder and should immediately update the signatures with the following command:

If you want to use a web proxy to connect to the Internet, use the following command to get a help for the “update” command.

We recommend excluding the mailboxes from the scan by adding the following lines to the file ./config/directory-excludes.cfg

Scanning this directory would just slow down the scan and – according to all available reports – wouldn’t be necessary to produce relevant findings.

Exchange on Drives Other than C:

If your Exchange server isn’t installed on drive C:, use the “–allhds” flag.

Since THOR Lite doesn’t provide modules for “Rootkit” detection or problematic modules like “Mutex” or “NamedPipes”, you shouldn’t have problems scanning systems without an Antivirus exclusion filter.

All YARA rules are included in a compressed and encrypted form so that an Antivirus shouldn’t trigger on clear text signatures as it is the case for most of the other YARA scanners including LOKI.

However, since some realtime engines check every file that THOR Lite has “touched” during its scan, an Antivirus exclusion can increase the scan speed by ~30% and avoid any interference (blocked access to some files etc.).

Scanning a Subset Only

You could run a scan on a subset only and skip other system folders. If you have a good picture of the location of the Exchange folder and all relevant sub directories (log files, owa web service folders), you could run a selective scan using the following command.

However, we do not know if all relevant forensic evidence can be found in that folder.

Don’t use the “–intense” flag or use it only in cases in which it is okay for the scan to take 12+ hours to complete and system stability isn’t a concern – which is almost never the case. The “–intense” flag is meant for lab scenarios or use cases in which a maximum detection rate is very important. Warning: That flag disables all system resource monitoring safe guards that we’ve integrated into THOR.

Test the scan on samples that you’ve collected using the following commands:

The first command reflects the scan mode that is used during a default scan with all modules. The second command starts THOR in “lab scanning” mode, which scans samples regardless of their extension and magic header. If you discover samples that get detected only in lab scanning mode, please let us know. (see “How Can I Help” below)

How Can I Help

Where can I find help?

Please first check the documentation, which is provided as PDF in the ./docs sub folder. It’s written for THOR, but many chapters also apply to THOR Lite.

You can report THOR Lite issues on Github.

How can I scan unsupported Windows version?

We provide a legacy version of THOR to scan outdated Windows version (2003, 2008) for our customers only. Sorry. You can find information on pricing in the license packs section.

How can I provide samples that haven’t been detected?

Please add information about them to a new issue on Github or send them to rules@nextron-systems.com.

I’ve subscribed to the Newsletter but didn’t get an email with a license file or the download links. What can I do?

The response emails sometimes get classified as SPAM. Please check your junk mail folder. In 100% of the cases in which subscribers didn’t get a corresponding email, this was the reason.